Posted by HayWoodArt On November 7, 2017

The Great Train Robbery is widely acknowledged as one of the most memorable crimes in British history. During the early hours of the 8th August, 1963, 17 masked men held up a Royal Mail transportation train at Bridego Railway Bridge, Buckinghamshire, London. Masterminded by Bruce Reynolds, the robbery was hugely successful due to the meticulous planning and tampering of signal lights by a member the team. 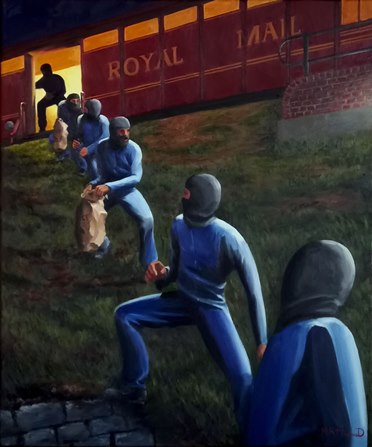 A seventeen strong gang had been employed by Reynolds to carry out the raid, including a retired train driver hired to move the train from the signal lights to the bridge. Unable to operate the newer model of train, the original train driver ( Jack Mills) was forced to move the train along to the unloading point. The gang had less than ten minutes in which to remove the mail bags from the train to the getaway vehicles; two land rovers and an ex army truck. A chain of men was formed to carry the sacks down the embankment to the waiting vehicles, after which the gang returned their hideout of Leatherslade Farm.

After the robbery the gang members retreated to the Farm to lay low and estimate their fortunes, discovering to their shock they had seized almost £2.6 million; approximately £50 million today. Subsequently a large police investigation was launched to capture the men led by Chief Superintendent Tommy Butler. Unfortunately for the gang the aftermath of the robbery was not coordinated well – the gang member responsible for burning down the farmhouse failed to execute, resulting in a mass of fingerprints and evidence. In one of the largest operations of the time, an unprecedented number of officers were assigned to assist in the manhunt. Although most members of the gang were apprehended shortly after the event, (it was several years before for Bruce Reynolds was caught after fleeing the UK) The Great Train Robbery is widely regarded as one of the most memorable crimes of British history and the twentieth century.

A selection of my figurative and Cityscape works are now displayed in Capital Art Gallery, London.

As of January 2016 I will be adding regular postings to a WordPress News page featuring the progress of new artworks as they are created. I will include in this column the initial concept and motivation for the artwork, along with rough drawings and images of the painting process and finished artwork.

My next posting will feature the creation of the first in a series of original paintings depicting Robert Scott and members of both his Antarctic expeditions from the early 1900’s.